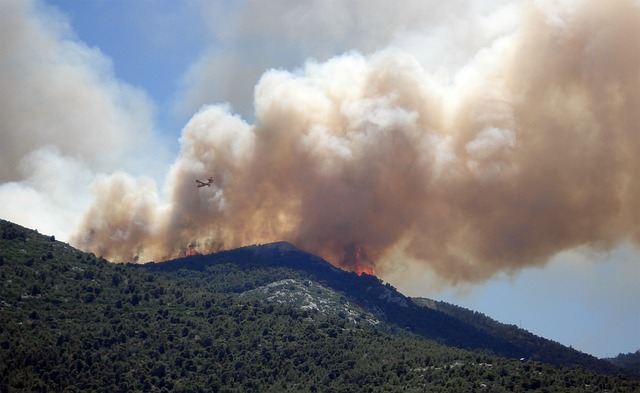 The 2018 wildfire season in California was the largest and most destructive the state had seen to date, resulting in nearly 2 million acres of burned land, thousands of destroyed structures and the loss of 44 lives.

Large fires have always been a part of California’s past, but experts believe that the increase in severity in the past few years is a result of climate change, a steady rise in global temperatures that has been in the forefront of scientific news. As temperatures in California have been getting hotter and the state has been increasingly subject to prolonged droughts, conditions that increase fire risk have been growing as well.

In the past century, average temperatures in California have increased by 3 degrees Fahrenheit. The warmer air pulls moisture out of plants, drying them out and making them into perfect kindling for a wildfire. The increased temperature also means that precipitation in California has decreased, only adding to the dryness. Rainfall that would typically come in October now comes later in the year, or not at all.

Coupled with fast-moving Santa Ana winds and accidental (or negligent) sparks started by equipment, campers, cigarettes or other sources, this dryness is a recipe for intense, devastating wildfires.

It’s important to note that the average number of wildfires that occurs every year in California has not changed. Instead, it is the severity of those wildfires that has increased dramatically, leading to infrastructure damage and loss of life across the state.

According to Michael Mann, a professor of atmospheric science at Penn State University, there is no doubt that climate change is the root cause of this increase in severity. “What we can conclude with a great deal of confidence now is that climate change is making these events more extreme,” Mann explained on a PBS NewsHour report. “You warm the planet, you’re going to get more frequent and intense heat waves. You warm the soils, you dry them out, you get worse drought. You bring all that together, and those are all the ingredients for unprecedented wildfires.”

Climate change is behind a clear trend: wildfires are getting larger and more intense.

The same fires that years ago would have been easier to control are now stronger and cover land more quickly. This is because there is just more dry brush to burn and when there are winds to carry small embers a far distance, fires spread much more easily. In a cooler world, the same initial spark would have resulted in a smaller, more easily managed, fire.

This makes fighting and containing California’s wildfires even more of a challenge. During the Woolsey fire in November 2018 that burned through thousands of acres of land, Southern California fire crews were joined by firefighters from other counties and states to combat the flames.

Climate change also has made California’s weather more static and unchanging. In previous years, November rains helped firefighters contain wildfires, but with lower rates of precipitation and more constant high temperatures, this is no longer the case.

After the wildfire season in California, state governor Jerry Brown called the severity of the fires a “new normal” resulting from the increasing temperatures and drier environment. Climate change has made undeniable, and unrepairable, impacts on our world and is something we will have to manage and contend with for decades to come.