What Are Sinkholes, And Why Do They Form? 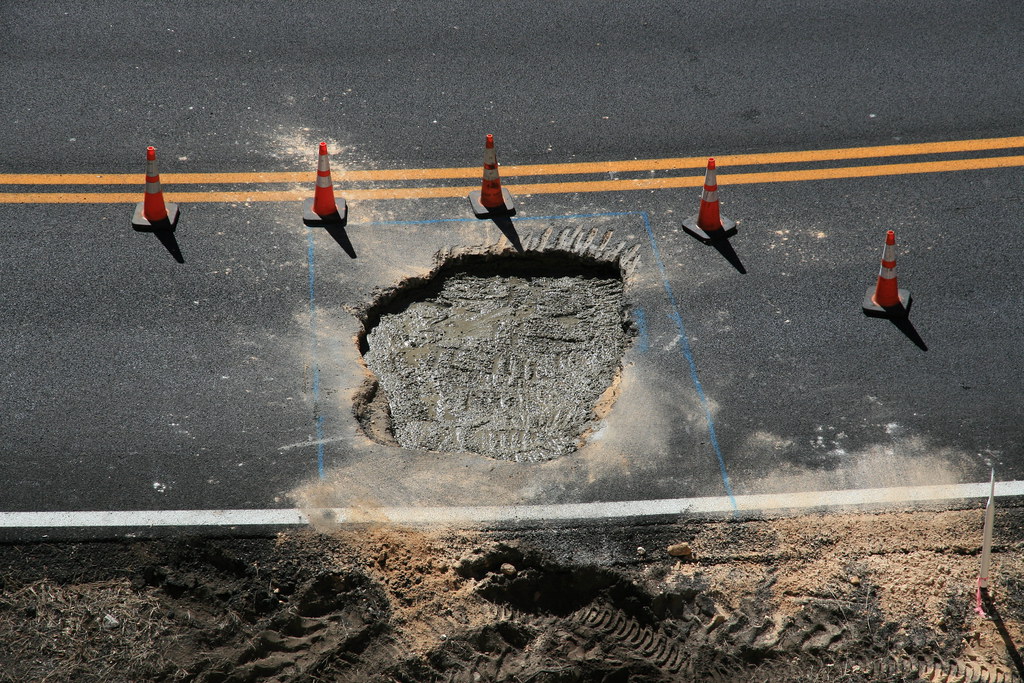 The name speaks for itself: a sinkhole is a hole that has formed from the originally normal ground that has sunk in, but how and why do they form? Sinkholes are just one example of the potential instability you might face when considering an area for new construction – and they’re a reminder of the importance of proper geotechnical analysis before beginning to build.

While they can happen anywhere, the states most prone to sinkholes are Florida, Alabama, Texas, Missouri, Pennsylvania, Tennessee, and Kentucky. Sinkholes are created when the terra firma below the exterior of the ground has been slowly dissolving and forming cavernous spaces that eventually lose the ability to hold up the surface.The types of rock that are under the surface that can be most easily eroded by water are salt beds, limestone, and other carbonate rock such as dolomite. Sinkholes can range from 3 feet to a couple of thousand feet in depth and diameter. No matter what size, they can cause serious and significant damage to roads, homes, and property.

It is important to note that there are different types of sinkholes, the most common of which are dissolution, cover-collapse, and cover-subsidence. These range in severity, depth and danger level, with variable costs associated with damages.

Dissolution of carbonate rocks is the most extensive at the point where water first contacts the underground rocks’ surface. Aggressive dissolution can also occur where water is concentrated in vulnerabilities of the rock structure along fractures, joints, bed planes, and in the water-table fluctuation area.

Surface and rainfall water percolates through joints in the rock, and fragments of the rock separate from the face of the surface, eventually forming a small depression. Surface drainage from an exposed depression can become focused, speeding up the dissolution process. Debris can potentially be carried into a developing sinkhole and may block the outflow, which can pond the water and lead to the creation of wetlands, such as in Florida.

Cover-subsidence usually develops slowly over time where the sediments are most vulnerable and sand infiltrates them. Granular sediments splinter and break into peripheral spaces within the lower rock beds, making room for overlying sediments to settle into the open areas. After more dissolution and infilling, a noticeable depression is formed in the land on the surface.

This will slowly continue to form into a depression that ranges from a few inches to more than a few feet. Cover-subsidence tends to be smaller and more undetectable for a longer amount of time when the sediments have clay or the cover material is thicker.

Cover-collapse develops when sediments break down into a cavity, leading the cohesive covering sediments to form an arch. The cavity moves upward through progressive roof collapse and eventually reaches the ground surface, forming sudden sinkholes. They form because there is a significant presence of clay in the covering sediment. These sinkholes can be very dangerous and destructive, for it can seemingly happen in an instant, causing extensive and possibly very costly damage.

Human Activity Can Also Cause Sinkholes

Sinkholes can also be created through human activity such as drilling vibrations, heavy traffic, and through changes in land such as creating a run-off pond or groundwater pumping. Wherever there may be a high incidence of human activity, the land should be analyzed for dangerous side effects like sinkholes.

It’s easy to put the natural phenomenon of sinkholes into a few paragraphs of writing, but nature is dangerous and unpredictable, and we learn something new every day. A sinkhole’s impact will likely result in very costly damage. It’s so important for yours and others’ safety to consult a geotechnical engineer to analyze your soil and foundation before planning any construction, in order to prevent damage or injury from a sinkhole. Doing so will give you peace of mind that the structural integrity of your ground will permit a safe, stable construction project now and well into the future.

Related posts
Guide To Soil Liquefaction
July 14, 2022
Why Should You Hire a Geologist?
February 14, 2022
Do ADU / Garage Conversions Need A Geotechnical Soil Report?
February 8, 2022
What Is Engineering Geology & Why Is It Important?
May 25, 2021
Hollywood Quake Fault Line Brings Up Echoes of Sylmar in 1971
August 30, 2020
What Is A Methane Mitigation Barrier Installation?
March 16, 2020
Recent Posts
Blog Categories
Our Services